A downloadable Bubbles for Windows

Awesome Cats entry for UE4 Summer gamejam 2018. Pop meta bubbles with you finger until the escalate and dominate you. Beat pop count and survival time

Project inspired by meta ball technique presented in one of UE4 streams, S-Ed did super work to make them work in VR, infinite number of balls and with depth clipping:

-It's VR project so it will start with blank screen, you need to put headset on to see the game

-You need a beefy PC to run it, in Oculus dynamic resolution should ease this out

The world is procedural as well, it is HISM, which are working really fast in UE4. It was animated in blueprints, and then in C++, but due to high amount of nodes it still was slow. It was possible to move animation code to the Vertex shaders but we already have huge load on GPU by the Raymarching cycles.
This game uses dynamic resolution to maintain the framerate, but it's not supported by HTC Vive, so use the resolution scaling in SteamVR if this game goes slow on high count of the bubbles.
Later I'll probably make a more optimized version, if I could to bypass the UE4 "bug" I could not bypass at the time.

You could hit me on twitter: https://twitter.com/mc_lo
Or Discord: https://discord.gg/unreal-slackers S-ed#7290 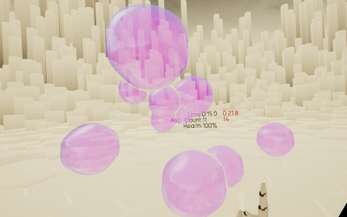